This post’s two oils are Algal Oil and Canola Oil.  If you would like to look ahead at some of the other feedstocks that Renewable Energy Group (REG) studied, or if you would like to look a little more in-depth at the comparisons here is the link to the Feedstock and Biodiesel Characteristics Report.   This is the main page of feedstocks we have looked at so far, and last weeks look at Borage Oil & Camelina Oil is here.  B20 Biodiesel (B20 stands for 20% biodiesel and 80% petroleum diesel)  is the drop in solution for reduced emissions in today’s modern diesel engines.  To understand what some of the alternate feedstocks that can be used for biodiesel, we are examining a report that Renewable Energy Group (REG) produced in 2009. All certificates of analysis and results are for B100.

Algal Oil has a huge potential to be the next source of Biofuel feedstock. Among the many benefits is that algae can be grown in any environment that can contain water, and algae doesn’t carry the negative stigma of using a potential source of food to create a fuel.  In addition, you could use algae to clean up waste water and then use the fats to create the biodiesel. A recent study here is working on that concept. The U.S. Department of Energy has recently invested $2 million dollars into University of Michigan for research into algae as a diesel fuel. (see story here) The goal is to find high yield algae that produce a high grade bio crude for renewable diesel or biodiesel. Here is the YouTube video about the research.

The two diverse samples of crude algal oil, that were used in the report from 2009, were obtained from Solazyme, Inc.  This Company works with algae to produce renewable oils and ingredients for industries. The report doesn’t go into what kinds of algae was used or the process that they used to convert the algae to oil. 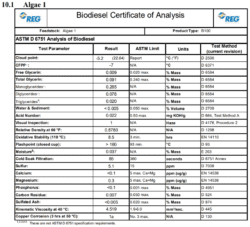 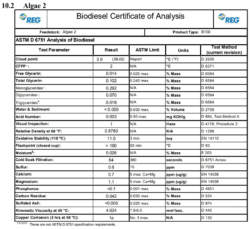 Canola is the seed of the species Brassica napus or Brassica campestris. 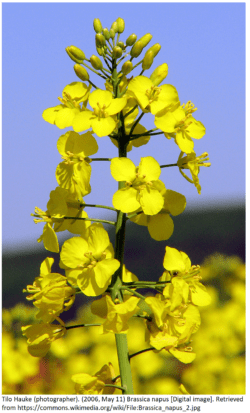 Brassica Napus is also known as rape or rapeseed.  The name rape is derived from the Latin word for turnip, rapum.  Brassicaceae is the family of which mustard, cauliflower and cabbage belong.  The name Canola comes from the contraction of Canada and ola, meaning oil.  Developed in 1970s by researchers from the University of Manitoba and Agri-Food Canada, the use of the term Canola means that the oilseed meets certain standards.  The Official Definition of Canola is:

According to Reuters, “Rapeseed is the most produced oilseed in the EU.” This trend is gradually shifting to soya beans this article continues to explain. Currently 60 percent of the vegetable oil used in biodiesel comes from rapeseed oil in the EU. 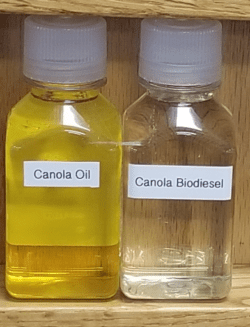