In this post we continue our deeper look into different types of feedstock that Renewable Energy Group (REG) studied in 2009 in the Feedstock and Biodiesel Characteristics Report. This week’s two feedstocks are Castor Oil and Choice White Grease. For more information and more feedstocks this is the main page of the feedstocks we have examined so far.

Castor oil comes from Ricinus communis, known commonly as the castor bean plant. While the castor bean is not a real bean, it is called this due to the shape of the seeds.  These seeds consist of about 45-50% oil. 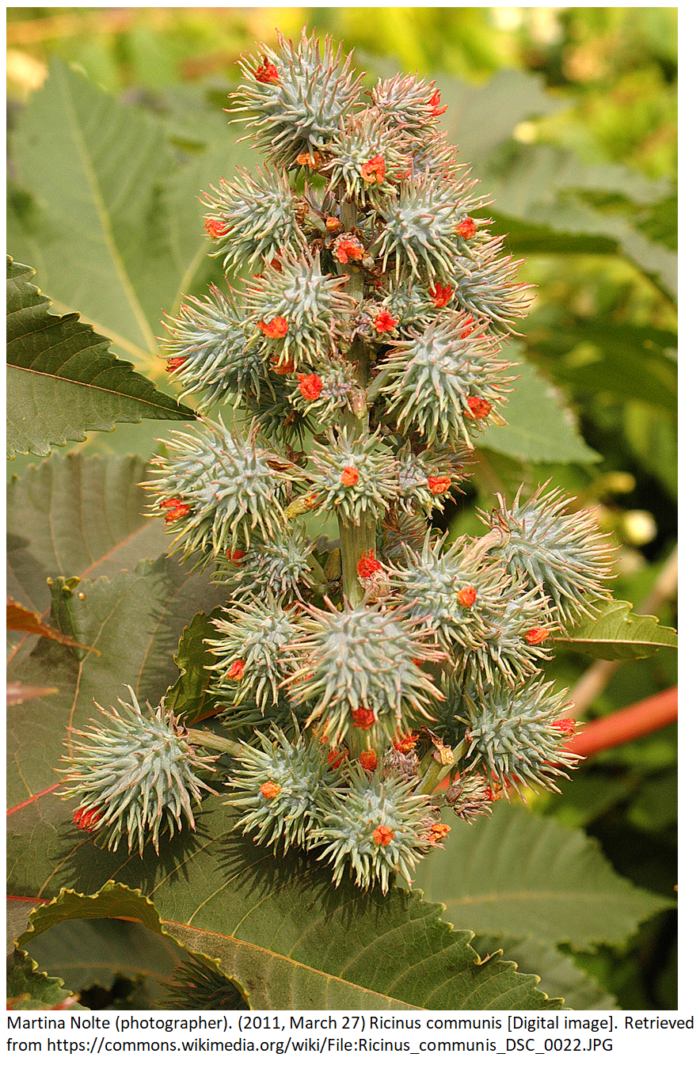 Ricinus communis is a fast-growing shrub type plant that can reach the size of a small tree. This perennial flowering plant is native to the southeastern Mediterranean Basin, Eastern Africa, and India, but grows easily throughout tropical regions. It is not a cold hardy plant, although in a suitable environment it can become invasive.  Castor bean plants are grown as ornamental plants throughout the world and are used extensively as a decorative plant in parks and public areas. The castor bean plan will grow rapidly in a single season, about 6-10’ tall. Ornamentally, it is most valued for its huge, palmately (having four or more lobes or leaflets radiating from a single point) 5-11 pointed lobes, toothed, glossy green leaves (each to 1-3’ across) and round, spikey, reddish-brown seed capsules. Small cup-shaped, greenish-yellow apetalous (lacking flower petals) spikes which are not particularly showy. Different cultivations of the plant result in dwarf and large plants, some with attractive reddish, bronze or purple leaves and bright and colorful flowers. 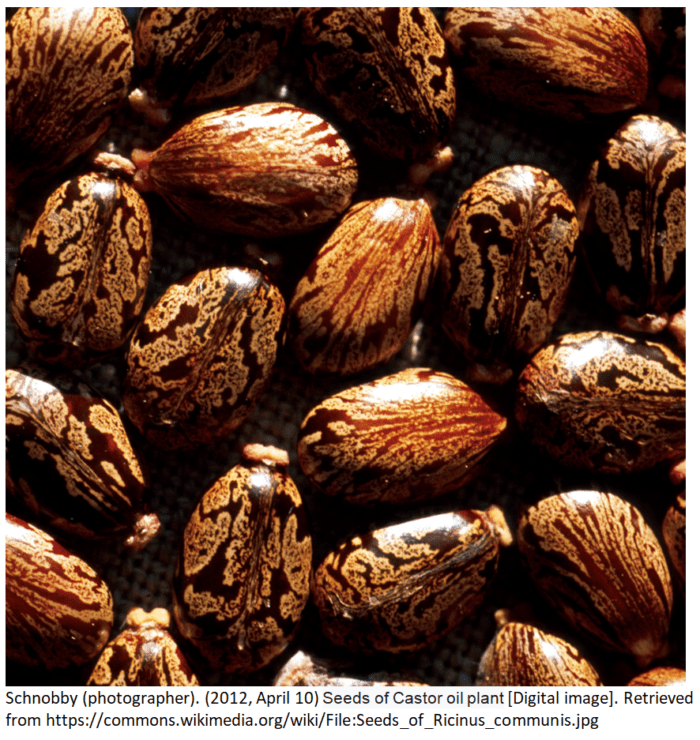 An additional benefit of this source of oil is that it doesn’t impact the food supply. The entire plant is poisonous, but has some reported medicinal uses. Other uses of the plant include being used as an insecticide against some ticks and food for silkworms. Castor oil has been used as a lubricant in engines for years, because of the high heat resistance it has historically been used in two-stroke engines. 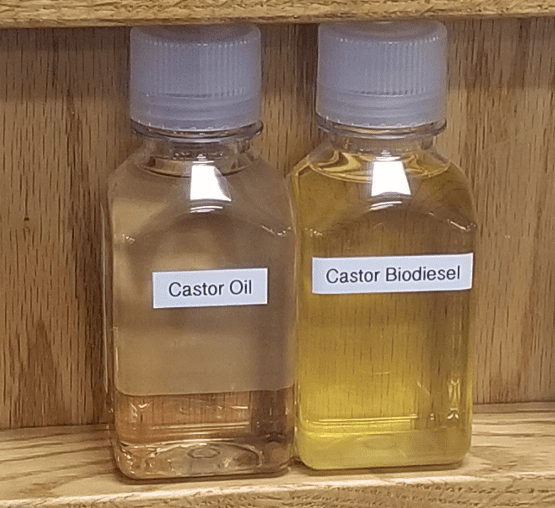 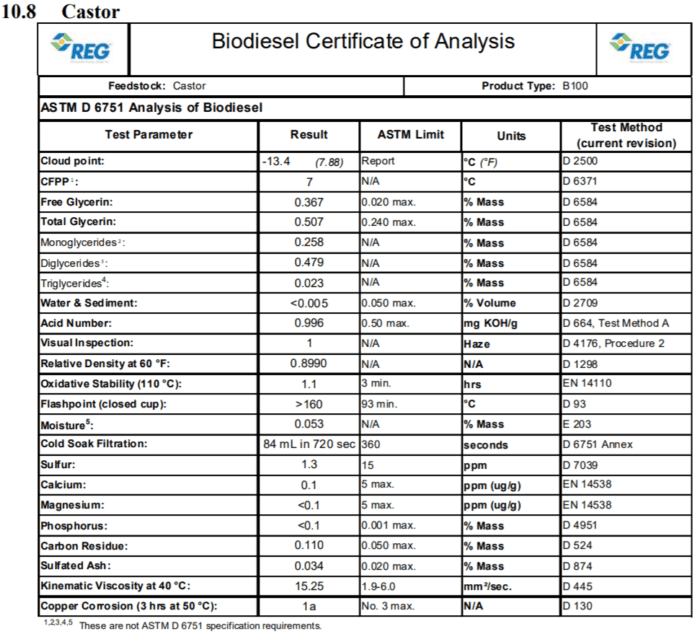 CWG is similar to beef tallow that we discussed in a previous week. It is an animal by-product, meaning that they are only produced in relation of raising the animal for meat or food production. As we can see from the picture it is a saturated fat and is at least partially solid at room temperature. This means that the resulting B100 biodiesel will have a higher cloud point.  CWG has historically been used as livestock feed. Additionally, using CWG for biodiesel gives pork producers an additional revenue and outlet for the product, helping elevate the return on investment for these farmers. 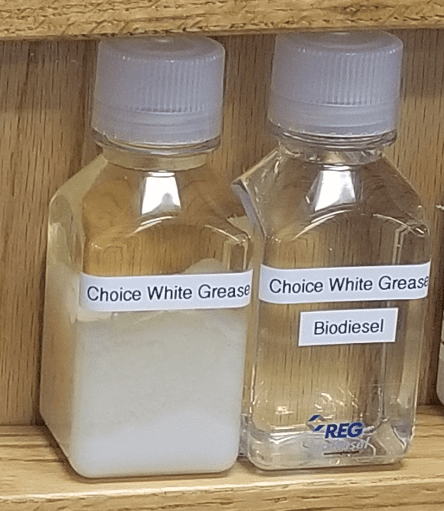 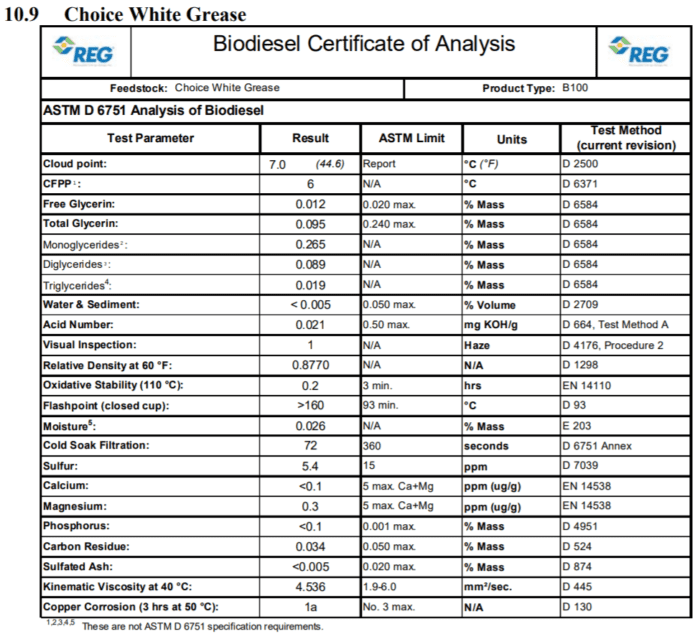