We are continuing our deeper look into different types of feedstock that Renewable Energy Group (REG) studied in 2009 in the Feedstock and Biodiesel Characteristics Report. If you would like to see what feedstocks we have talked about, this is the main page and it links to the ones we have examined.

As a reminder, B20 biodiesel (B20 stands for 20% biodiesel and 80% petroleum diesel) is the drop-in solution for reduced emissions in today’s modern diesel engines. To understand some of the alternate feedstocks that can be used for biodiesel, we are examining a report that Renewable Energy Group (REG) produced in 2009. All certificates of analysis and results are for B100.

This post is a bit different as we have only one successful biodiesel created and two failures. The oils are jatropha oil, jojoba oil and karanja oil.

Jatropha oil comes from the shrub Jatropha curcas, also known as physic nut, Barbados nut, poison nut, bubble bush or purging nut. This plant is a succulent that loses its leaves during the dry season. It is best adapted for arid and semi-arid conditions. The resistance to high degrees of aridity allows it to grow in deserts. This shrub can thrive on only 10 inches of rain for a whole year. It is native to Mexico, Central America, Brazil, Bolivia, Peru, Argentina, and Paraguay. Jatropha curcas is considered a shrub or small tree and can reach a height of 20 ft. or more. 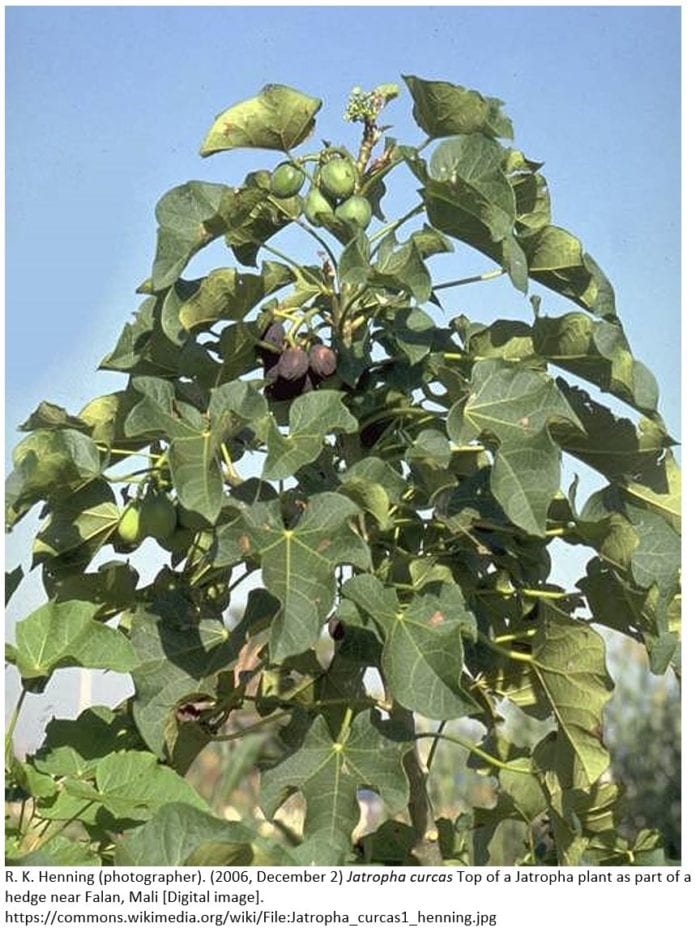 “Shrubs begin to produce when only 4 – 5 months old, and reach full productivity at about 3 years Under good rainfall conditions, nursery plants bear fruit after the first rainy season, while directly seeded plants bear for the first time after the 2nd rainy season. With vegetative propagation, the first seed yield is higher. At least 2 – 3 tonnes of seeds per hectare can be achieved in semi-arid areas.” (Source)

The seeds contain 27% to 40% oil (Source) and develop in 90 days from the flower to the seed. Trees can have a productive life of 40 to 50 years without tending.

Uses of the plant include medical, edible and as a source of oil for biofuels. The young shoots and even young leaves can be cooked and eaten as a vegetable. The nuts can be eaten but they are purgative and, if eaten in large quantities, can be poisonous.

Medicinal uses include uses the juice from the bark as a treatment for malarial fevers and or using it to treat external burns, scabies and ringworm (Source).

The low maintenance and high oil content makes this plant attractive as a biofuel feedstock. In addition to its use for biodiesel, the oil has been made into jet fuels. In 2008, Air New Zealand flew a plane on 50/50 mix of jatropha oil fuel and jet A1 fuel (Source).

Currently biodiesel is being produced from this plant in the Philippines, Pakistan and Brazil. 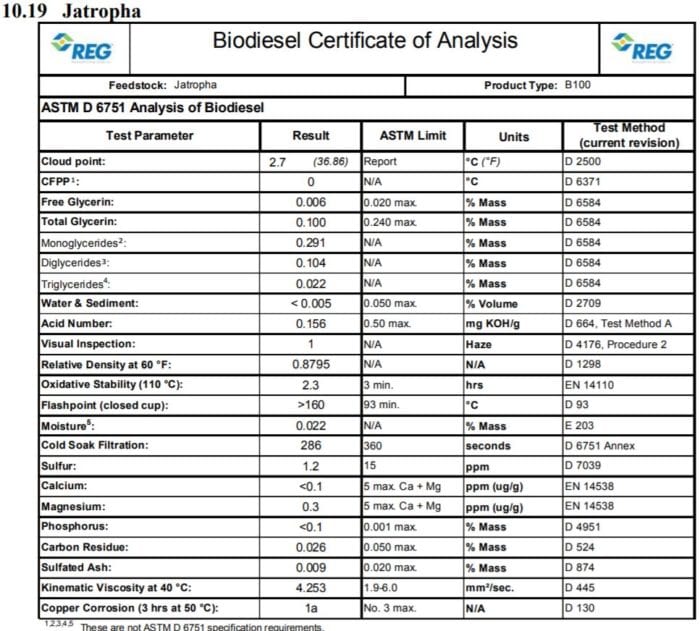 Golden jojoba oil was produced from the plant called jojoba (Simmondsia chinensis), an evergreen perennial shrub grown in Arizona, Mexico, and neighboring areas. Some of the common names of this are goat nut, deer nut, pignut, wild hazel, quinine nut, coffeeberry and the gray box bush (Source). The dehulled seeds of jojoba contain 44% of liquid wax ester, which is not a triglyceride. 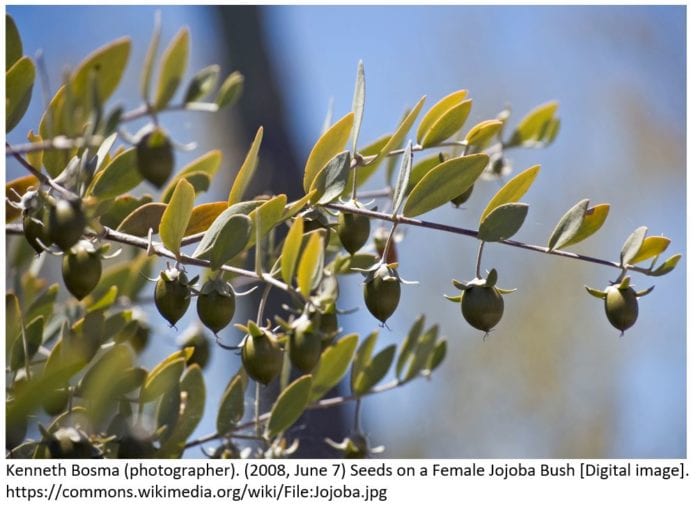 This shrub grows to 3 to 6 feet tall and some can get as tall as nearly 10 feet. The fruit is acorn-shaped and .4 inches to .8 inches long.  The seed is dark brown.

Uses of the plant include forage for wild animals such as deer, bighorn sheep and some livestock. In large quantities, the seed meal is toxic to many animals. The oil is different than many of the feedstocks we have discussed.

“Jojoba is unique in that the lipid content of the seeds, which is between 45 and 55 wt.%, is in the form of long-chain esters of fatty acids (FA) and alcohols (wax esters) as opposed to triacylglycerols (TAG) encountered in other vegetable oils and animal fats” (Source).

Because of this, the Jojoba oil wasn’t made into a biodiesel for this study. According to the REG Report:

“The purpose of this project was to transesterify all the feedstocks using the same procedure and if jojoba was done differently, comparisons could not be made with jojoba methyl esters. Jojoba can be transesterified and used as a fuel using a different process.” 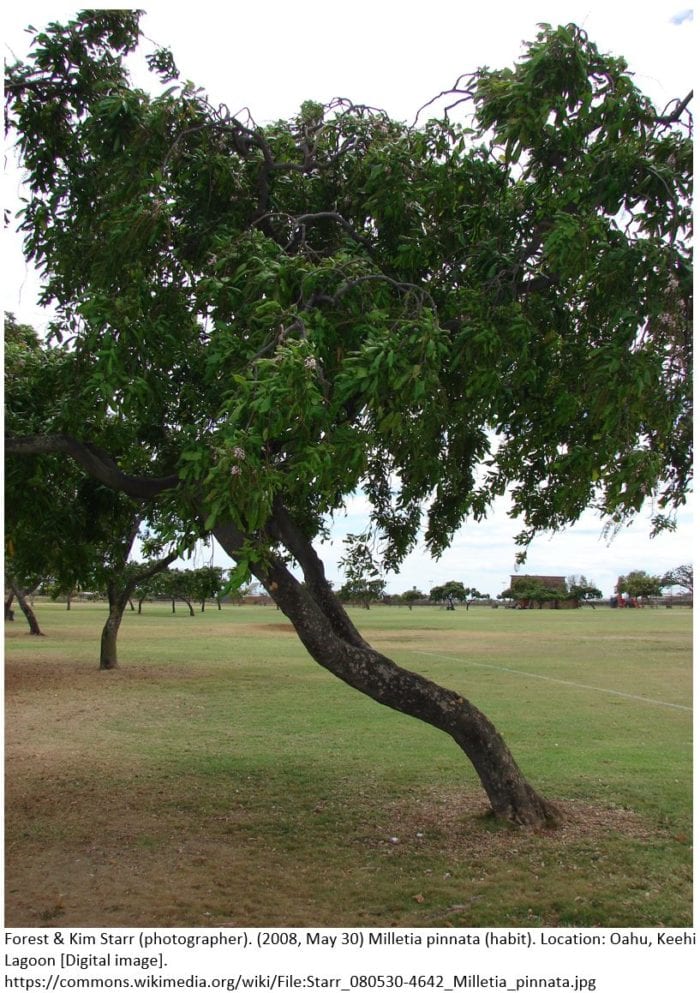 Karanja (Pongamia pinnata) is a medium sized evergreen tree, and usually about 25 ft. tall but can grow as large as 80 ft tall (Source). The tree has dark green leaves and the very fragrant flowers of lavender, pink and white.  The tree grows in the humid tropic and can be found in India, China, and Japan. The seed contains 27-39% oil.

Karanja is used for oil production and has some successes in India as a feedstock. In regards to this study, they weren’t able to create a biodiesel fuel using the same procedure as the rest of the feedstocks and therefore there isn’t a sample created to test.

REG’s notes about this oil are as follows:

“Esterification was only able to reduce the FFA (Free Fatty Acid) of the oil to 0.7 wt %. Since 0.5 wt % was the maximum amount of FFA allowed in the feedstock, karanja was not made into biodiesel using the standard procedure. A small scale experiment was performed to see what would happen to the karanja when it was transesterified. A 20 gram sample of karanja oil was used, along with the standard ratios of chemicals as in the other feedstocks for the project. After the water wash step, the karanja formed an emulsion with the water and the phases would not separate. No further refining experiments were done to make karanja suitable for transesterification.” 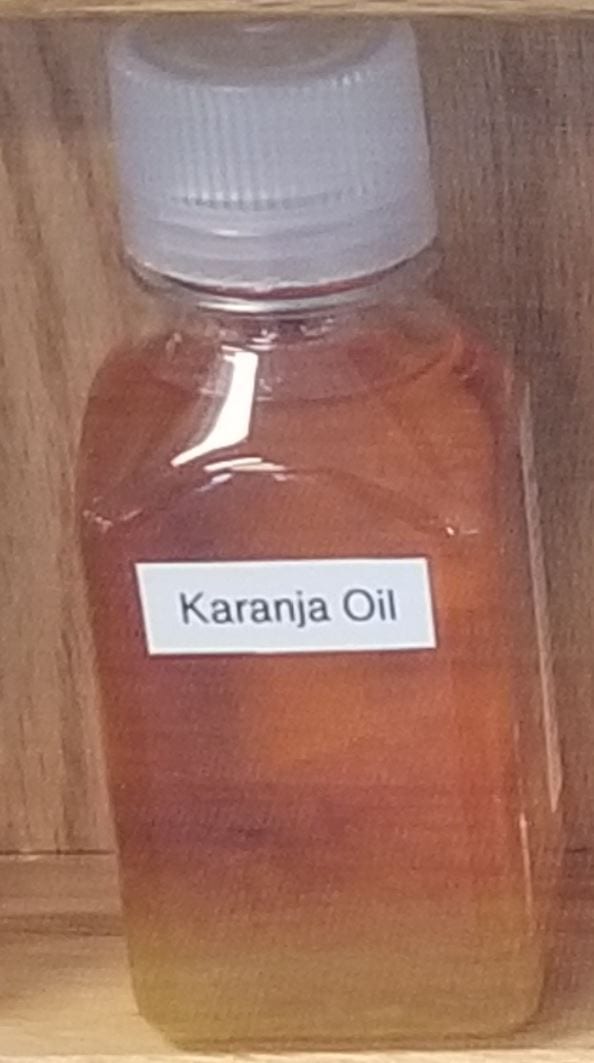