The story with PS300 Boiler Fuel in Oregon

The current replacement for PS300 in the Oregon market.

PS300 has recently become scarce as a fuel in the Pacific NW.

Star Oilco is immediately ready to keep you in fuel oil.

Here’s why and what you should do.

As Spring approaches nights are still cold.  Our winter started with a real question of industrial oil burners being cut off for PS 300 or #3 Heating Oil (PS stands for Pacific Standard and the 300 number refers to #3 diesel fuel).  As these requests for PS300 fuel rolled in we have been supporting these fuel users with #2 ultra low sulfur off road diesel.

What’s the difference between #2 diesel or #3 diesel?

PS300 is a blend of bunker fuel (marine industrial fuel) and diesel.  The blend is designed to enable a bunker fuel to burn with out pre-heating.  Due to both a requirement of marine fuels to go ultra low sulfur as well as Oregon’s low carbon fuel standard bunker fuel as well as the PS300 associated with it is being discontinued by fuel sellers.

Here is why you should use number 2 diesel instead of PS300 to replace your go-to industrial boiler fuel.  Call us with any questions you may have about using ultra low sulfur diesel, biodiesel, or another fuel in your industrial boilers.

PS300 is a high sulfur petroleum oil based industrial boiler fuel. It is a diesel rated fuel, similar to on-road diesel in many ways. Until recently it was the dirtiest liquid oil fuel you could legally burn in a boiler in Oregon. Star Oilco has not sold PS300 in decades since lower sulfur superior boiler fuels are usually available at the same price. That being said, we are hearing from plenty of industrial users of PS300 who want it, will not accept another fuel, and have plenty of questions about what is going on.  (Wikipedia has a basic primer on diesel.) We hope to answer the following:

If you have other questions on the subject please don’t hesitate to ask.

What are the policy reasons effecting my supply of PS300?

The government wants cleaner burning boiler fuels. PS300’s phase out has been coming a long time. There has been a concerted effort to clean up diesel emission in the U.S. since Bill Clinton was president. This has been an EPA-led effort collaboratively pursued by Oregon’s DEQ. In fact there is even a requirement for large oil boilers to prove they are tuned up by the EPA as part of their focus on reducing emissions from boilers. Due to this long term successful policy goal to clean up diesel emissions, the cost of handling PS300 as a fuel have changed. PS300 is a high sulfur fuel (often above 3000 part per million compared to the 15 parts per million of ultra low sulfur diesel). The economics that made PS300 a low cost industrial fuel have changed and those that made it are no longer offering it as their market volumes are dropping fast.

What’s the background? What are the standards for diesel and boiler fuels?

The U.S. EPA has plenty of information about the details of their policies. In a nutshell, this is the story of what is happening to specification.

A goal was set by the EPA to follow similar success in Europe to clean up diesel emissions. The big concern being radically reducing asthma and cancerous particulate emissions, volatile organic compound (VOCs) emissions, as well as NOx smog causing emissions. Sulfur in the fuel causes particulate emissions. VOC’s and NOx can be cured by scrubbing the exhaust of a diesel engine through a particulate trap. Both of these efforts require a radical drop of sulfur in US diesel fuels. To this end, the U.S. EPA, the California Air Resource Board, and the states all worked to reduce the sulfur content of fuel along a timeline.

In 1997 the U.S. on-road diesel fuel standard required under 500 part per million sulfur by law which is “Low Sulfur Diesel” by definition. This on-road diesel standard was again lowered to 15 parts per million sulfur in 2007, which is today’s current U.S. standard, called “Ultra-Low Sulfur Diesel” or “ULSD” by definition for all equipment (off-road equipment, locomotives, and on-road trucks.  In 2015, all U.S. off-road construction equipment, generators, and other off-road equipment also require ULSD as their de facto fuel in order for them to operate properly. To this end, industrial boilers and home heating oil systems are the final place where low sulfur or high sulfur fuel might find a market.

Contrasting today’s diesel specification with PS300 (which has thousands of parts per million sulfur), you have a cross over contamination issue. If a little bit of PS300 comes in contact with a large volume of ultra low sulfur diesel, it is not longer legal to sell as ULSD.  Ten years ago that was not a big problem as there were other markets capable of running a higher sulfur diesel. Today, that’s not an option. This is why most of the purveyors of PS300 have stopped offering it.

Typically the big market for high sulfur fuels was boilers and large watercraft. Marine diesel drinking huge sums of fuel enabled a nearly bottomless market for any diesel with above 15 ppm sulfur in it. That has changed. At the end of this year, marine users are going to be required to use a ultra low sulfur fuel by law. With that coming, the refiners and vendors of boiler fuel are seeing their largest customers for high sulfur diesel specifications like PS300 going away and are changing to meet this need. As PS300 was usually bought by industrial boiler users based on price, the ability to handle PS300 as a low cost fuel is no longer possible due to the much smaller volumes with the marine market no longer taking it.

What is the difference between PS300 and other fuel oil type boiler fuels?

PS300 is a blend of different products into a final industrial fuel. Often the sellers of PS300 had asphalt operations and the ability to move various waste products from that into a burnable fuel was the source of where this came from. This association with asphalt can be seen in some of the government bids on the product ten years ago. There was even a specification that pieces of gravel had to be under a certain size in fuel to ensure it would not obstruct the lines. Below is the listed ingredients and properties of PS300 from a MSDS. It’s 65% to 100% residual oil or bunker fuel, as much as 10% clean diesel fuel, and cutter stock (which was likely various diesel flush products used to clean asphalt or other lines).  The percentage of the “Fuel Oil Residual” probably had everything to do with it’s viscosity and the temperature at which the fuel flowed. 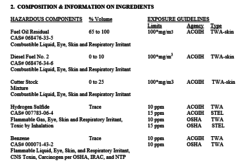 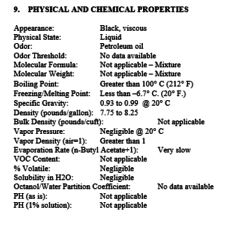 In another “Bunker Fuel” or #6 Diesel “Black Oil” MSDS they describe the product being made as a “Blendstock of distillate and residual petroleum fractions to prescribed viscosity ranges.” This also shows a viscosity of 68 cSt which is a little thicker than diesel and biodiesel.  Looking a host of other MSDS’s outside of the Pacific NW it is apparent that this viscosity number ranges from the high 50’s to in the 90’s.  No doubt this is in reference to how much fuel oil is mixed in the making of the fuel. That range varying.  So the viscosity specification appears to be between a little thicker than number 2 diesel to an extremely viscous fuel.

To compare viscosity between the different fuels we found a chart at the Anton Parr Wiki.

So what’s the difference between PS300 and diesel? Number 2 diesel is a lighter gravity, higher quality, more consistent, and cleaner fuel. PS300 is a higher end (number 3 or 6 diesel) with a higher viscosity, flash point, and more Btus. Though number 2 diesel is a different rated fuel, your boiler should have no problem with a lighter diesel product, though consulting the maintenance provider to the boiler on this fact is necessary.

Performance should improve given the cleaner burning characteristics. The only reason your boiler was probably running PS300 was because your system was built with the lowest cost fuel in mind. The availability for this fuel has changed.

Beyond petroleum fuels there are also biodiesel residual oils as well in the Pacific NW.  This being a lower grade biodiesel boiler fuel product that mixes readily with diesel for boiler fuel use. A specification sheet is below from Renewable Energy Group on their “Bio-Residual Oil” or “BRO” for short. 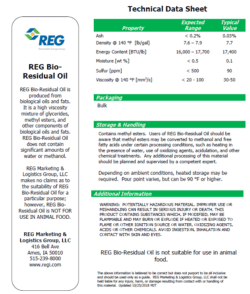 What do I need to consider if I am going to continue to source PS300 or convert to a cleaner burning fuel?

Anecdotally we have been told the big concern of going from a PS300 (bunker fuel blended with diesel product) to a pure diesel or biodiesel blend product is dialing back the fuel pump pressure. Tuning the fuel pump to ensure the fuel air mixture is right. A lower viscosity product at the same pump pressure means a rich fuel mix.  So tuning up the boiler and ensuring the fuel air mixture is correct for diesel is highly recommended.

Routine maintenance should be your big consideration in looking at diesel for your boiler. As you change fuels, you will want to tune your vaporizing burner for the different fuel. Cleaning the system, ensuring your fuel nozzle is cleaned to work efficiently, and adjusting the fuel air mixture for the most efficient burning of your new fuel possible are important aspects. The property of a fuel oil is determined by its specific gravity, vapor point, flash point, and how clean the fuel burns. The difference between PS300 and ultra low sulfur diesel is that PS300 is a heavier diesel rated fuel. As PS300 is a very heavy and dirty fuel, there is no reason why you would not expect a low sulfur or ultra low sulfur fuel to work in your boiler. More to the point you can also use B20 and higher blends of biodiesel, which in the winter are often substantially cheaper in Oregon with our low carbon fuel standards.

You should expect the reduction in sulfur will ease maintenance as the coking and soot build up will be reduced going forward. These boilers are notable for their wide tolerances and ability to burn a wide mix of fuel components.   As you can see above, with the wide percentage difference of what might find its way into PS300, the more consistent standard diesel fuels should have no problem. In the past we have seen many PS300 boilers do well with high blends of biodiesel all the way up to B100. Any concerns associated with changing fuels should be fixed by routine maintenance associated with tuning the fuel air mixture of the system to ensure it runs efficiently on the lower gravity and cleaner fuel.

Feel free to call or message us if you have further questions about about PS300 and the current market for industrial boiler fuels. 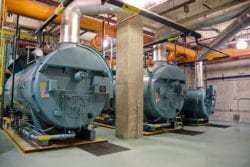 Star Oilco also has B20 Fuel Oil blends available and are lining up Biodiesel Residual Fuel Oil (“BRO” for short) as a low cost substitute for PS300 users later in November.