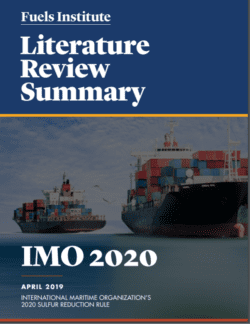 The Fuels Institute has reviewed literature and available research on potentially large market changes coming for diesel fuel users. By far and away this is a the best source for information we have seen on the subject.

The International Maritime Organizations 2020 Low Sulfur Rule is moving the standard marine fuel to ultra-low sulfur specifications. This change is effective January 1st, 2020 and will affect the entire market for diesel. The presumed big effect is that there will be a much higher cost for the ultra-low sulfur diesel fuel used by on-road industry.

Today the fuel of choice for marine use is typically bunker fuel, a mix of high sulfur distillates (diesel) and other residual fuels that are cheap. According to the Fuel Institute report, the current sulfur content is 2.2% mass/mass. The upcoming IMO2020 Sulfur Rule will drop the expected sulfur content of marine fuels by 77% in order to comply.

There is also a chance that maritime operators will maintain the use of high sulfur fuels and install scrubbers on their ships to clean up the stack emissions coming out of their watercraft.

In order to met this maritime demand, most reports agree that big costs are involved for refiners to upgrade their capacity for this market need. The impact on cost varies but according to the Fuels Institute,”overall, estimates of price impacts to gasoline and diesel range from about 25 cents to 75 cents.” These impacts are limited to a two-to-three year window as the lower sulfur need works its way through the industry.

The world of energy is changing. No doubt those of us watching for it will be ahead of the curve. 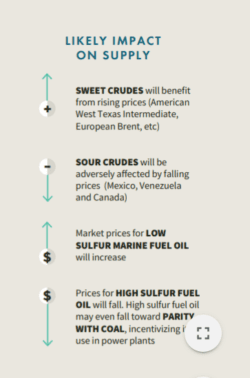 For more or to really look in-depth into what maritime sulfur specifications mean for the diesel market, the citation provided by the Fuels Institute IMO 2020 paper will provide you a full education into the subject. We highly recommend it.